Every year, Discovery’s Shark Week gives tens of millions of viewers the thrill of being in the water with some of nature’s most fearsome predators. For some, this turns into a direct desire to be face-to-face with rows and rows of teeth, relying on cutting-edge intellectual property to keep them safe. To honor one of the most popular annual events on television, we’re using Anaqua’s AcclaimIP patent search solution to look at just a few of the fantastic inventions and creations that keep people safe when nature swims by. Here are a few of the more exciting patents around shark deterrence, repellence, and thrill-seeking.

Modern Armor for the Dive

Early divers sought protection from pressure and predators through airtight, rigid metal suits that looked very much like medieval knights in armor. Suits were bell-shaped and significantly restricted movement while providing some protection from the denizens of the deep.

For sharks, this likely meant a potential snack that was hard to get at, but also slow and easy to catch. The SCUBA revolution gave divers significant flexibility underwater but removed much of the protection from larger predators, such as the great white and hammerhead stars of Shark Week.

Sharks typically determine if you are prey or something else by biting down on you to see how hard your surface is. When their teeth touch something sturdy, they tend to back off because the meal would be too difficult to tear and chew. SCUBA suits often weren’t tough enough to prevent this mealtime test. 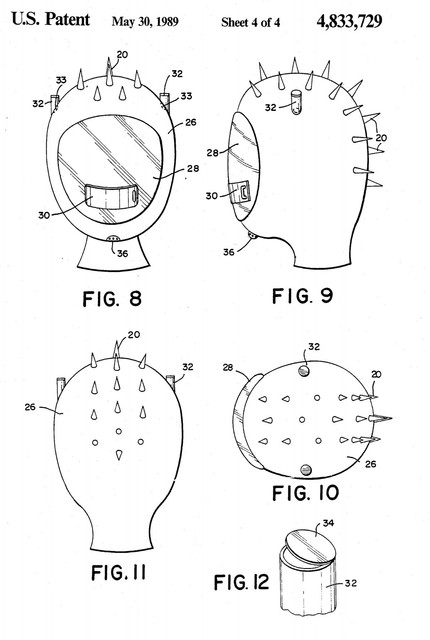 Nelson and Rosetta Fox offered their version with a shark protector suit that combines a rubber suit and helmet with a series of spikes designed to prevent a shark from being able to close its mouth around the wearer. Their design (patent # US4833729) aims to provide significant deterrence so that sharks will not continue to clamp down on the diver and extends protection with an additional visor and support for oxygen equipment.

They’re both intelligent additions to the realm of protecting the divers inspired by Shark Week as well as the phenomenal camera and TV crews that get the footage we enjoy from the safety of our sofas.

Playing in Peace and Safety

Many of the shark-related patents we uncovered are also designed to keep humans and sharks separate, deterring interaction by appealing the natural characteristics of sharks.

These efforts can protect both people and wildlife, ensuring a long life for both. As the Discovery Channel puts it: “healthy oceans need sharks.” So, here are a few ingenious patents designed to maintain that healthy balance.

Michael Wescombe-Down took the understanding that electromagnetic pulses can deter sharks and other aquatic creatures in the Elasmobranchii group and refined the needed equipment into an ankle cuff so that the user is unencumbered. His patent (patent # US20050039692A1) ensures you can still swim, surf, dive, ski, and enjoy the water while keeping sharks at bay. Hans Peter VanLancker went a different direction with his shark-repelling aquatic apparel (patent # US20060105652A1) that forgoes spikes, chemicals, and electrical fields for a stripped pattern discovered to be effective in repelling sharks. It relies on a new scientific understanding that pattern is “the critical element in repelling sharks,” more than color hues or combinations in dissuading these predators.